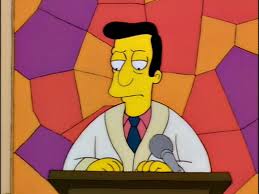 I’ve commented before about some excellent work Zach Hoag, Ben Howard, and others have done in pointing out the challenges of celebrity within evangelical circles. Recent revelations regarding Mark Driscoll’s marketing expenditures have brought the question back to the forefront. So have the reactions to Steve Furtick’s “spontaneous baptisms” (and, more importantly, the assumptions behind the Furtick coloring book!).

Last week, I suggested that Ned Flanders gave us an image of what Testimony Evangelicalism might look like. So the conflation of various media stories made this a good time to follow up on the guy up front in Springfield’s favorite church.

One story that crossed my twitter feed this afternoon was this one by Ruth Graham. I was struck by her opening line:  “By any measure, pastor Mark Driscoll is wildly successful in the contemporary evangelical world.” As we enter the Lenten season and the story of Christ’s passion, the idea that someone would be “wildly successful” as an evangelical seems really out of place.

Here’s another cute story from today’s twitter feed. At On Pop Theology, Rebekah Mays created a quiz to parallel all the “which character are you” internet sites but predicts Christian celebrities. Depending upon the answers to a range of questions, you could wind up as the guy from the nudist church in Virginia (you really didn’t want the link), Joel Osteen (before they lost all that money), Mark Driscoll, Tim Keller, Rachel Held Evans, or Pope Francis. (Having seen Rachel last night, I loved that she was runner up to the Pope!).

A third piece on my twitter feed today (in fact, I keep getting distracted by updates about it) was this graphic that attempts to show the historical development of neo-calvinism. I’m not sure of the categories the authors use (my distractions involve discussion about the “race” column). While I haven’t read all these people or tracked with the musical developments, my sociological instincts tell me that we move from a series of influential authors in the 80s and 90s (which I keep identifying as the period of evangelical apex) to a focus on institutional development in the 90s and 00s. The timeline suggests that organizational vibrancy is far more significant than new scholarship in that period. (Paradoxically, the emergent movement may have an anti-institutional bias which keeps it from moving beyond the authorial phase.) As I’ve written before, the Putnam and Campbell “second aftershock” is the reaction of millennials against the institutionalization of the previous decades.

So…what’s the deal with Reverend Lovejoy? Why is he such a contrast to the gentle fumbling sincerity of Ned Flanders? This is probably oversimplistic, but I think it’s because Lovejoy sees himself as representing the organizational entity we call church. He’s the figurehead and much of his identity is tied up in the visible role he plays (especially when he has to confront his own doubts and would much rather play with his train set). Even the way he speaks betrays “that tone” that must come from some special voice class at seminary!

Yesterday on Facebook, Zach Hoag posted the question, “Are we in the last days…of Mark Driscoll’s ministry?” Without fulling knowing this post was floating around in my brain, I wrote this:

Surprisingly, I hope not. As you keep pointing out, evangelicalism’s fascination with celebrity can be scary. If we individualize Driscoll’s issues so that he takes a healing sabbatical, another celebrity pastor will take his place. Somehow we need to come to terms with the way Evangelicaldom (I made that up) is complicit in creating the conditions that allow Driscoll’s missteps.

So I’m trying to figure out why many evangelicals are drawn to circle around Christian celebrities. Why do we look for champions and then line up behind them (even if we don’t have Elevation coloring books)? Why do we stay on the lookout for those who criticize the celebrity and then rush to denounce the attacker? Why do we hang on to hope in the celebrity long after most of the world has moved on? Why are we so reticent to admit the failings of those we put up on such high pedestals, waiting all the way until the final moment of disgrace before reluctantly admitting something was wrong (see Bill Gothard for only the most recent example)?

As evangelical Christians we come upon the season of the year when we become most acutely aware of how Empire put the Son of God to death. We recognize the value of that death (I just spent two days with a bunch of theologians talking about atonement!) and the incredible power of the resurrection.

That’s a proposition as scary as it is costly. We would much rather build institutions that show we are right in our thinking, that we know what the answers are, and that we have Our Guy up there in front (I’m not being sexist, I’m accurately representing the leadership as it is — that’s part of the problem).

If we put a celebrity up front, or in the podcast, or on the cable news interview, we have someone who represents us. He can be the one we identify with. We can say, “yeah, what he said” and feel we’ve participated in the Gospel. But we didn’t. We just sat passively; vicariously experiencing someone else’s position.

If Reverend Lovejoy tells us anything, it’s that he doesn’t like being put in that position. He can’t be a real Christian to the faithful in Springfield because that would make us uncomfortable. He has to be a caricature of himself because that’s how we want it.

On the other hand, once the Gospel narrative gets past the crowds with palm branches (which it does very quickly), we see a Suffering Servant marching slowly toward the sacrifice that changes everything.

Maybe that’s the kind of leader we all really need. And need to be.

2 thoughts on “What’s the deal with Christian Celebrities?”