I’ve been following the stories out of Ferguson, MO closely over the last two weeks since Michael Brown was shot by officer Darren Wilson. There have been many articles written about racial profiling, justice, “White privilege”, and the militarization of police. The cable news media eventually decided there were stories to tell and devoted hours of first-person coverage (which, as Conrad Hackett observes was three days after the shooting and after one million tweets had crossed the internet). 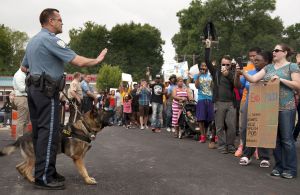 The Pew Research Center asked if the Ferguson story was “raising important issues about race” or that “race was getting too much attention”. They found that nearly half of whites (47%) thought that race was getting too much attention (with just over a third opting for “raising issues”). Conversely, 80% of blacks said that these were important issues compared to 18% saying “too much attention”. My social media feed reflects these sentiments fairly well, although it probably skews a little more toward the issues side. As I’ve read comment threads on Facebook, I find that many commenters are struggling to understand what the issues are and may in some ways be misreading the issues. So I decided to write this letter.

I’ve been paying attention to the comments you’ve made about the events in Ferguson, pondered the questions you’ve raised, and thought quite a bit about how to respond in ways that don’t sound like name-calling. We have way too much of that as it is.

I’ve heard you refute claims that Officer Darren Wilson is a racist. I think it is quite probable that he isn’t a racist. In fact, that is the problem.

If Officer Wilson were a racist (apparently like his colleague who pushed CNN’s Don Lemon), we could chalk it up to a bad actor, have a conduct hearing, and remove him from the force. If he went out of his way to brutally attack an 18-year-old young man, there would be clear cause for disciplinary action (the civil rights investigation will likely focus on the disproportionality of his response). But Officer Wilson was doing his job. That is the source of the frustration.

When a regular part of his serve and protect duty requires him to see a jaywalking black young man as a potential threat, there is a problem. When an altercation ensues with the hotheaded young man, it is seen as potentially life-threatening for the officer who may then respond with a resort to deadly force. It’s not the deadly force that is the problem, it’s the combination of factors that made that seem like the right option to pursue.

When you refer to Michael Brown as “a thug”, because that’s the label we use for young men who get in trouble with the police, that is part of the problem. Because we wind up generalizing from sketchy evidence and presuming guilt. It leads us to the presumption that somehow his bad behavior meant that deserved to be shot six times. It’s not that he’s an innocent. It’s that he reinforces images from entertainment media and allows us to use them as self-justifying descriptions of what went on. That’s why it’s so hard to hear stories like those of Pastor Leonce Crump (shared by Ed Stetzer here and here): they don’t align with our preconceptions. Why is it that a minister of the gospel has been stopped by police while walking or driving almost annually since he was 15. At 34, that’s over half his life. But there are factors that cause us to associate violent crime with large black men, so the stereotype is justified.The police officers who pulled Rev. Crump over were probably not racist. And that is the problem.

The protests in Ferguson were seen as a source of threat to the newly militarized police force. Concern over looters (who some have suggested “deserve to be shot”) creates a situation where the police mobilized with the worse case scenario in mind. Their concern over individual agitators might be rational but the vast majority of the protestors were exactly that, protestors . There was no way to isolate the troublemakers from the regular protestors. So everyone faced MRAPs, flash bangs, and tear gas. And that is the problem.

Some of you have suggested that we focus on white on black violence without being concerned about black on black violence. We should be trying to curb violent responses in any situation but instead we try to figure out who’s situation is worse (here’s a hint: it’s white on white). Our entertainment media celebrates street violence with bigger and bigger weapons. Our political establishment is so concerned about infringement of second amendment rights that it blocks any reasoned attempt at limiting firepower. Is it any wonder that police departments see value in larger and more effective military weaponry? But the problem isn’t white on black violence — it’s power on powerless violence. The concern in Ferguson may be worse because it was a white officer who did the shooting, but the issue would still be there had the officer been black.

Some have focused on opportunists who see turmoil as an avenue for anarchy or for looting business or for celebrity grandstanding. There is certainly some of that. But our interaction with cultures other than our own, especially in light of increasing residential segregation, feeds those possibilities. Philadelphia police commissioner Charles Ramsey spoke to the issue of assumptions about neighborhoods on NPR this week. He described why he insists his officers walk the beat in the neighborhood.

All of the recruits that graduate from our police academy start off on foot patrol in areas of our city that have a high concentration of crime being committed in public space. Now it does a couple things. One, it does have an impact on crime. Temple University did a study here that showed a 22 percent decline in crime in the areas where we establish foot patrol. But more important than that, it teaches them at a very early age that there are more decent law-abiding citizens living in that challenged neighborhood than there are criminals or people causing problems. You don’t get that when you’re driving 30 miles an hour in a Crown Vic down a street. You do get it when you’re walking down a street and you have a chance to interact with everyday people on a positive note (emphasis mine).

Some have argued that the real problems among urban blacks is one of culture. Quoting libertarian social economists like Thomas Sowell, they pick up the “culture of dependency”, or “lack of male role models” or gang culture in general. As Commissioner Ramsey points out, one can find evidence of these factors but not everywhere. There are far more supportive black families in the city than we might believe. That we so easily think otherwise, whether by wanting them to clean up their neighborhood or by passing liberal policies based on deprivation models, is part of the problem.

Over sixty years ago, sociologist Robert Merton constructed a typology using the relationship between prejudice and discrimination. It’s summarized in the follow chart.

I don’t like the terms “bigot” and “liberal” in the typology, but that’s what Merton called them. But his typology is still helpful. I’m not really concerned about the cell in the upper left. Such folks are deserving recipients of social disapproval. Their comments (like those after the Miss America selection) are rightfully denounced by others. The upper right category is what we see pop up on Facebook, Twitter, or Comment sections of articles. People who wouldn’t say anything prejudicial in public feel free to do so with the relative anonymity of the internet.

It’s the bottom left category that is interesting to me. That is where people live their lives in ways that perpetuate discriminatory practice.

Not by intention but by inattention. Failing to see how their lives differ from others makes it easier to see their lives as “normal” and let systems perpetuate themselves. I’m honestly not sure there’s anybody in the bottom right category.

My friend Karen Swallow Prior has been encouraging people to read Maya Angelou’s first autobiography, I Know Why the Caged Bird Sings. Karen argues that this book does an excellent job of demonstrating the structural issues involved with race, the ways that people’s lives are influenced by the color of their skin and the discriminatory practices that accompanied that distinction.

As it happens, I finished Caged Bird the day before Michael Brown was shot. We were reading it for a book group I was part of in Portland. The early part of the book takes place in the late 1930s in cotton country Arkansas. But the structural difference between what whitefolks (as she put it) could do and blackfolks could do was gut wrenching. That was 20 years before Brown v. Board and 30 years before the voting rights act. But lay Angelou’s book from the 30s and 40s alongside Ta-Nehisi Coates article on reparations in The Atlantic and you see a stunning consistency over time.

This is the real issue with Ferguson. It’s that patterns of structure in which people find themselves create the kinds of animosities and cognitive assumptions that take a confrontation between a young man and a public service officer and make them symbols of everything that has constrained part of the population for literally generations. We talk about “white privilege” but that privilege is really the freedom not to worry about these larger structural concerns. Many of the folks in Ferguson and neighborhoods like it don’t have that freedom.

I apologize for those who have called you insensitive or bigots. I understand that you want to wait on the complexity of the situation to be resolved. But at the end of the day, the folks in Ferguson need you to acknowledge that their situation is different than yours. Not because they’re deviant but because of things beyond their control and beyond yours and beyond mine. The only solution to moving outside the lower left quadrant of Merton’s typology is to acknowledge the discrimination that is experienced and work to alleviate it.

Finally, let me acknowledge that I’ve spent far too much time in the lower-left quadrant myself. As a sociologist, I know what the stakes are but don’t do enough to change those structural dynamics I do control. After Ferguson and New York City and St. Louis and LA, that must change. For me and for all of us.

So what can we do? Consider these words yesterday from the President of the Evangelical Covenant Church (see full statement here):

I thank God for gracious, courageous, and persevering friends. The letter is a call to all of us to join God in seeking redemptive purposes out of the pain of Ferguson. We begin with prayer:  for Michael Brown’s family; for police officer Darren Wilson and family; for the witness and intervention of churches in Ferguson; for normalcy in the streets and progress in community reform; for Covenant churches in the region ministering through the complexities. But going forward we will best be God’s agents as our hearts remain pliable to seeing things more clearly, feeling things more deeply, and acting more resolutely. That happens when we continue to call out the best in one another and walk with one another into the harsh realities of a fallen world . Yes, we’re in it together.

12 thoughts on “To my friends who don’t get why Ferguson matters..”