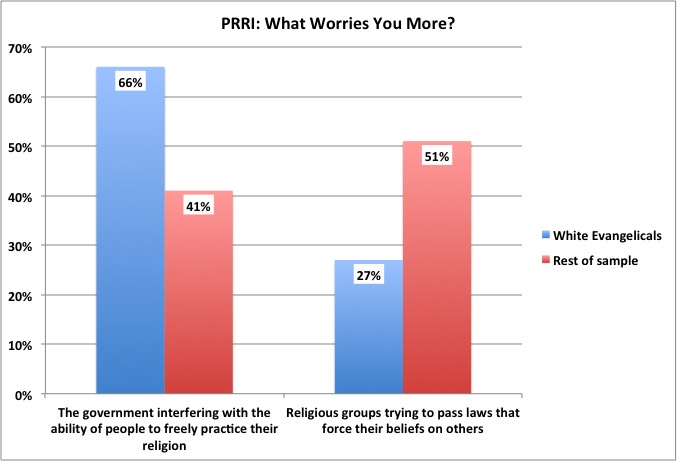 Last week, the Public Religion Research Institute (PRRI) released their American Values Survey. They collected data on about 4,500 subjects. One of the questions focused on the tensions present in the religion clauses in the First Amendment. In what we call a “forced choice” question respondents were asked “What Worries You More?” with two options: Government Interference in Religion or Special Rights given to religious groups. When they presented the data, they provided data for all respondents and then examined the impact of different religious affiliation. Their publication included the following bar chart.

Right away, I noticed the contrast between responses of the total sample and those of the White Evangelical subgroup. As you can see, the sample overall split exactly evenly at 46% for each option (with a small number saying both or refusing to answer). The results for white evangelicals were very different. It wasn’t possible to really explore the data with simple percentages, so I wrote the PRRI folks for subgroup sizes. I am grateful for the quick cooperation of Dan Cox, research director at PRRI who gave me the data.

Turns out that there were just under 900 white evangelicals in the survey choosing one of the two options or about 21% of the total sample. The sample sizes let me compare the responses of White Evangelicals to everyone else in the sample.

What I found was exactly what my statistical instincts told me about the initial data.

As the chart at the top of this post shows, while evangelicals are concerned about government interference by more than two to one (I left out the “both” and “no answer” options), a majority of the rest of the sample is more worried about religious groups gaining special privilege. The latter data may be a response to the Hobby Lobby decision or recent news about Title IX exemptions at Christian Colleges. If you put the contrast in the chart into a two-by-two table and run the statistics, the data is wildly statistically significant.

But the data is also aligning with what we see in the media. The end of the week saw a story break about Corrie ten Boom’s The Hiding Place being banned from a Charter School in Southern California. The director ostensibly removed the book from the “state-authorized lending shelves” because she believed there was a ban on “sectarian materials”. At least that’s the story told by the Pacific Justice Institute, a religious rights group. Alan Noble wrote this follow-up explaining that things were not as nefarious as first suggested, and that the Charter School issue had more to do with the nature of the “library” and what books can be purchased with state funds (as opposed to private donations). Even this explanation remains suspect to those who raised the concern (read the two updates in this story to see how suspicion wins over attempts at explanation, however unclear.)

This is completely consistent with the PRRI data on how white evangelicals see the “What Worries You?” question.

Consider two other examples from recent news. On Saturday, the site Raw Story re-released a story from last month. Right Wing Watch reported on remarks made by religious broadcaster Rick Wiles in which Wiles said “Ebola could solve America’s problems with atheism, homosexuality, sexual promiscuity, pornography, and abortion.” Or consider the reaction last week in Arvada, Colorado to a conservative school board promoted a social studies curriculum that promoted “partriotism, respect for authority, and free enterprise”. Students launched a protest, which included a twitter hashtag (#JeffcoSchoolBoardHistory) of fake history accounts (e.g., “Upton Sinclair’s The Jungle is a great American story of capitalism and savory meat products.“).

I don’t think I’m stretching the facts to argue that these two examples fit the “religious groups worry me” side of the equation.

But there’s still a puzzle here. Why are we so eager to grab a bad news story out of the mix and run with it? Is a Charter School in California indicative of major cultural shifts (the Cal State/InterVarsity issue was far more important). Is a random religious broadcaster I’d never heard of someone who speaks for evangelicals? (Given the number of hours broadcaster have to fill, it’s almost guaranteed that something outrageous will spill out over the airwaves.)

I can think of at least three reasons why folks are so willing to gravitate toward these examples: the data narrative, specialized organizations, and group dynamics.

1. There is a sense in which the data listed above serves as both an independent variable and a dependent variable. In other words, the belief that either government or religious groups are a source of concern shapes what one looks for in terms of news. The fear of government infringement or religious particularism encourages one to be on the lookout for examples. Examples that probably don’t deserve to be on anyone’s radar. At the same time, finding those examples and sharing them in social media solidifies the separation shown in the chart above. Every indicator, however isolated, is another case of “I told you so”.

2. These stories don’t occur on their own. Groups like the Pacific Justice Institute exist to be on the lookout for infringement examples and to push back on those. People are employed to do this and spread the word to others. Similarly, Raw Story and Right Wing Watch (along with the Southern Poverty Law Center) are established to watch out for outrageous actions on the conservative side. When we subsequently become outraged and share stories on social media, we are doing exactly what those organizations hoped would happen.

3. My Spirituality, Faith, and Justice class is reading Christena Cleveland’s Disunity in Christ. As I’ve written before, this is an excellent application of social psychological research to issues confronting the Body of Christ. Early in the book, Christena titles a section “We Are Unique; They Are the Same“. Because we have contact with people like us, we’re aware of the great degree of diversity of thought present in our groups. Because we don’t have contact with others, we find we can easily categorize them. So I can read a comment from a religious broadcaster and immediately dismiss him as being a fringe voice that doesn’t represent evangelicals I know (even those I disagree with). But someone outside the evangelical fold will see him as representative (or fear that he is). If I don’t know public educators, I can easily dismiss them as all being secularists who are engaged in Christianaphobia. But even secular educators often jump the gun and might be rebuked by their secular colleagues.

We do not have to play into the dichotomies represented in the PRRI data. But it will require a much more developed sense of general patterns and outliers. It will require a willingness to give people the benefit of the doubt before hitting “Share” on Facebook. It will require actually thinking of others as well-intentioned, even if misguided.

It will require us to listen to the other and learn something.