If you follow higher education stories in the media, if you listen to consultants, or if you hear speeches from university administrators, you know that today’s students are different than those in past generations. They are primarily concerned about jobs more than liberal arts. They are narcissistic and materialistic. In short, they’ve made education a means to an end, so we in higher education simply need to adapt to the new realities or face extinction.

This rhetoric is hard to reconcile with those things we call facts.

Last Thursday, the Higher Education Research Institute at UCLA (one of the premier sources on university life in the world) released their annual Freshmen survey. As the Chronicle of Higher Education explains, the survey reports on “153,015 first-time, full-time freshmen at 227 baccalaureate institutions”.

The Chronicle story included some interactive charts and linked to more interactive charts here. Naturally, I spent some time yesterday playing with them. What I found paints a much more complicated picture than we normally hear. At the risk of upsetting the Chronicle’s lawyers, I’ve taken some screenshots of the charts to illustrate my point. 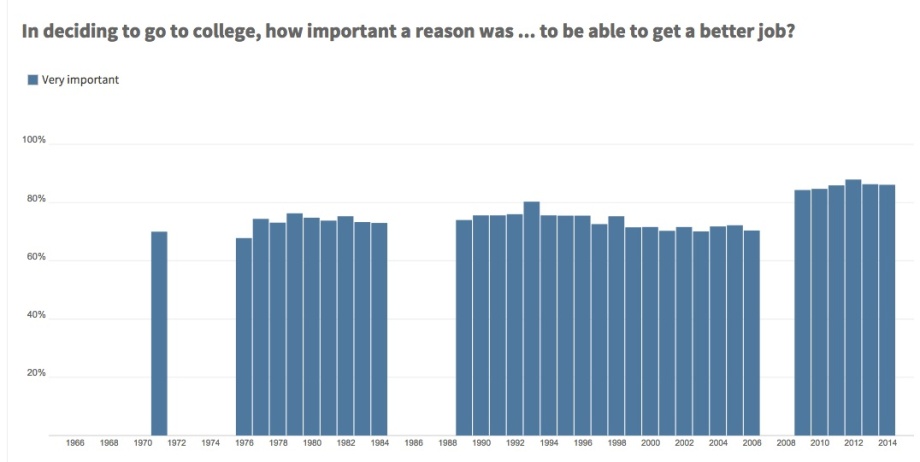 I know the numbers are hard to figure out, but the interactive chart allows you to hover over a column and find out what the exact percentage was for that year. It is true that the percentage of freshmen focused on jobs is now over 80% and has been since the Great Recession (could it be because we’ve been telling them that? — talking to you Mr. Obama!). But it’s been running just above 70% for the life of the survey. There is only one year when that percentage was below 70% (1976 was 67.8%). So while there has been an increase, it’s a matter of degree and not a stark change in ideology.

If anything, the college and money connection is even more stable that the jobs data. The percentage agreeing that “making more money” is why you go to college crossed the 70% line in 1988 and hovered either side of that mark for the next 16 years. The post-Recession surveys show a minimally higher percentage but it’s only an increase of less than 5%. It has long been true that a college education increases lifetime earnings and a student needs to be aware of that.

The stability in these two charts is even more remarkable when you consider the increase in the college bound population (measured as a percentage of high school graduates) and the demise of the job market for those with only high school diplomas. It would be reasonable to see an increase in both measures in light of the reality of higher education’s gatekeeping function.

But students today don’t really care about learning, right? They are mostly concerned with gaining a credential they can trade for future success. That’s what the never-ending drumbeat of “is college worth it” posts seem to suggest. Why would there ever be a need for residential liberal arts colleges? 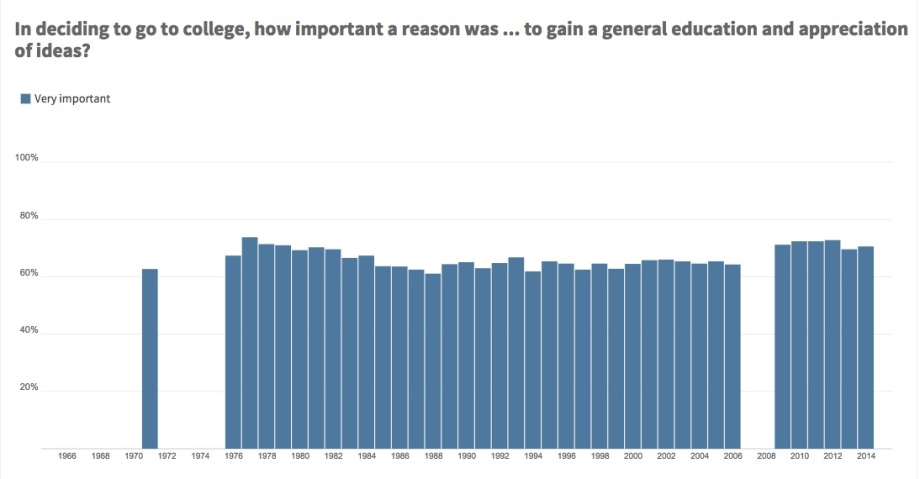 This chart shows the percentage of students agreeing that the purpose of college was “to gain a general education and appreciation of ideas”. Not only is it relatively stable, but the data for recent years is higher that it has been since the late 1970s.

I’ve been teaching long enough to know that these attitudes reported at registration don’t always play themselves out in daily practice. But it’s clear that students have a much better grasp on what to expect from college than we credit them with.

One more test of the common wisdom. We often hear that today’s students are interested in STEM fields (Science, Technology, Engineering, and Math) and that liberal arts are old hat. The HERI survey asked students their intended major (which is not an accurate measure of their final major as many will change along the way).

This is called a “stacked column” graph and can be slightly distorted. Because all the percentages must add to 100%, an increase in one area is matched by a decrease in one or more other fields. But it does paint a picture of how things change over time.

Some areas seem to have a more stable presence among students and change fairly slowly. Others show something of a “wave” motion that allows us to see the growth of a popular area and its subsequent decline.

To see this work, I hovered the cursor over various colors and moved left to right. Arts and Humanities shows a strong sense of stability, although falls off slightly in the last couple of years. Social sciences are fairly stable over time, ranging from 10% to 13% over the last 30 years. On the other hand, we can see a burst of interest in Business majors in the late 1980s before it re-establishes at a level about 10% down from its high point. Education shows some significant growth during the 1990s but faces serious losses over the last 5-6 years (which our campus enrollments reflect). There has been a marked increase in Physical and Life Sciences in the last four years but time will tell whether this is a shift or simply a bulge more like Business and Education showed in the past.

It seems to me that students are deeply aware of issues of vocation and calling and not simply chasing the hot new job area. They may be aware of limitations in certain job sectors (e.g., education) but still place a high value on areas of personal strength and interest.

I’m glad that HERI gathers this data each year.

Maybe the quality of higher education would be easier to demonstrate if we stopped chasing our tails about supposed new trends and paid more attention the students sitting in front of us each day.