I’ve been thinking of this post for quite a while. In fact, it goes back to 1991 when Bill Moyers first travelled to Milwaukee to interview families disrupted by the closure of the Briggs and Stratton lawnmower plant (which was moving to Mexico). The families affected were people who had, in Bill Clinton’s words, “played by the rules”. They stayed out of trouble, worked at the plant, and believed that the future would play out as promised. (Moyers returned to this topic in a 2013 Frontline special titled Two American Families.)

I thought again of the Milwaukee families when I read Nate Silver’s FiveThirtyEight blog Monday (written by David Wasserman). As their chart shows, there is a remarkable split among Republicans based on whether they have college degrees or not. 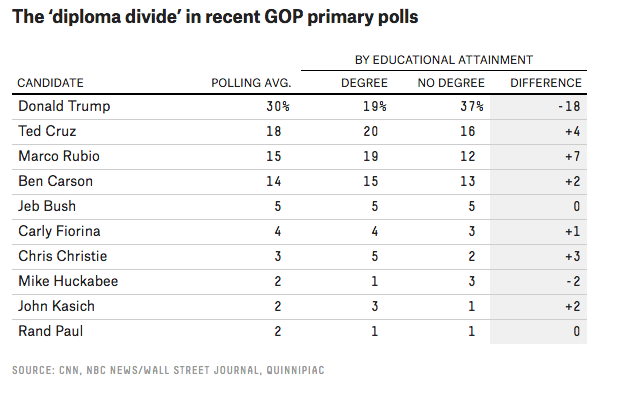 Trump’s support comes disproportionately among those without a college degree. Among those with a degree, he’s in a dead heat. E.J. Dionne reflected on this pattern in his column Monday:

But Trump’s enduring strength among the most disheartened members of his party — and the divided loyalties of upscale Republicans — suggests that it is wishful thinking for the Republican powers that be to say they are sure he will never be nominated (emphasis mine).

One the common themes cutting across these stories is the way in which things have changed in American society for the white working class. Underneath all of the “Is College Worth It?” stories is the fact that the bottom has fallen out economically for those with only a high school diploma.

I’m not sure that Dionne’s “disheartened” is strong enough. If I look back at the Moyers material, what we’re talking about is closer to “betrayal”. There is a large segment of the American population that believes they were sold a bill of goods. They worked hard at jobs that were dirty, kept their churches afloat, and showed up a Rotary every week. And what to show for it?

And who cares? Not politicians, not Hollywood elites, not “the lamestream media”. Not a 2008 presidential candidate who talked of people clinging to guns and religion.

It’s what created crowds of “real Americans” following Sarah Palin across middle America in 2008. It’s why some people are more likely to find conspiracy theories compelling in the face of evidence to the contrary.

Five years ago, I was working on a project I called Broken Stories. My thesis was that social change was undermining the narrative identity of many Americans resulting in feelings of betrayal, anger, and frustration. My conference presentation in October of 2011 included this passage:

The arrangements of social structure, which had been relatively stable in decades past, provided a narrative model that was internalized, passed along to children, and reinforced by the folks in the weekly bowling league. Of course change was happening, but there is a natural lag between those structural changes and the compensating narrative identity.

The last twenty years have seen an acceleration of changes at the structural level. The uncertainty of those changes has, as a short-term byproduct, a retrenchment on the side of narrative identity. Seen in this light, claims of abandonment on the one hand and desires to “take our country back” on the other, are actually rational responses to a situation of radical social change. Civil discourse becomes a challenge when it is blocked by fear and anxiety.

That same year, former Secretary of Labor Robert Reich came out with the updated version of his book on the great recession, Aftershock (2008|2011). He documents how the Great Prosperity (1945-1975) gave way to growing inequality. In a flight of fancy, he imagined an election in 2020 where an Independence Party won the presidency by combining nativist sentiments on the right with anti-finance sentiments on the left. The newly elected president, Margaret Jones, begins her victory speech as follows:

It almost sounds like Reich knew that Trump was going to run!

But I don’t want to dismiss those Trump supporters as a bunch of racists, rubes, and xenophobes. They are reacting to something real. And that’s what troubles me.

Things are changing in American society. And “Make America Great Again” offers little more than a fuzzy nostalgia which doesn’t hold up to evidence.

But the change is real. Demographics are shifting. Millennials are at odds with their Boomer predecessors. Religious Pluralism is here.

If you want a snapshot of what I think motivates the Trump supporters I’m writing about, look no further than the title of a forthcoming book by Robert Jones, CEO of the Public Religion Research Institute: The End of White Christian America. Jones is right in terms of demographic and attitudinal shift in the broader society. But I can’t think a more alarmist title for those who feel left behind.

What does all this mean? Mostly I’ve been thinking about what happens to all of these folks when Trump loses at some point down the road. It might be in the primary process or at the convention. At the very least, Nate Silver is right when he points out that the numbers just aren’t there for a national election win for The Donald. In a piece he wrote last month titled “Dear Media, Stop Freaking Out About Donald Trump’s Polls” (which they haven’t), he explained his logic pretty clearly.

One problem with this is that it’s not enough for Trump to merely avoid fading. Right now, he has 25 to 30 percent of the vote in polls among the roughly 25 percent of Americans who identify as Republican. (That’s something like 6 to 8 percent of the electorate overall, or about the same share of people who think the Apollo moon landings were faked.) As the rest of the field consolidates around him, Trump will need to gain additional support to win the nomination. That might not be easy, since some Trump actions that appeal to a faction of the Republican electorate may alienate the rest of it. Trump’s favorability ratings are middling among Republicans (and awful among the broader electorate).

It’s unlikely that they will simply say, “Oh well, that’s how democracy works.” Unless we can address the material realities of this segment of the population and help them find their story in a changing America, part of electorate will continue to believe that something was taken from them.

If anything should be driving the policy thinking of the major political parties, it should be on how to engage this disaffected segment back into our democratic process.

3 thoughts on “After Trump…”