Over the last few days, I listened to Hillbilly Elegy by J.D.. Vance and finished reading Evicted by Matthew Desmond. Reflecting on these two books has me thinking about the nature of inequality and public policy in the light of our recent election campaign. My takeaways are likely a little different from what you may have read in the media but I think they point to some large issues we need to confront as a society. 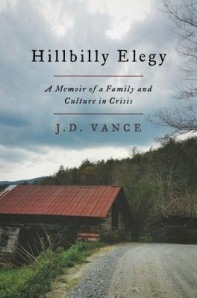 Vance’s book is a personal reflection on his own journey from an Appalachian family to a Yale law degree. Many have used it as a lens for interpreting the “forgotten America” that disproportionately supported Donald Trump in the election. If you live in Manhattan, it’s probably a different world. But it’s really a fairly common story of family disruption passed along intergenerationally.

While the roots of Vance’s family run to Eastern Kentucky, most of the action takes place between Dayton and Cincinnati, Ohio. The grandparents, Meemaw and Papaw, had left “the holler” when they were very young. The combination of an unwed pregnancy and factory recruiters aggressively looking for workers for the steel plant set them on their course. There are issues with alcoholism, anger, and family disruption that extend to J.D.’s mother. Vance describes the challenges that came with her prescription drug dependency, loss of steady work, serial relationships, and trouble with the police. The instability of his life would appear to set him up to be yet another generation in the long pattern of generations.

Vance makes much of “Appalachian culture” — with a focus on self-sufficiency, keeping family business private, an individualized sense of religious life, and a limited focus on schooling. Meemaw’s approach to religion is interesting. They never go to church because they were taken advantage of once but she reads the Bible every night and says her Christianity is very important to her although she swears excessively and threatens troublemakers with violence. As she says, the Bible tells us that God helps those who help themselves (which is Ben Franklin and not Jesus).

It’s worth mentioning that the books Vance mentions in support of his argument come from a culturist viewpoint (the lessons he takes from Charles Murray’s Coming Apart give that away). But the cultural argument needs to be more robust than it is usually made. It is often framed in a deficit model — the lack of established cultural expectations is used to explain the unwed pregnancy, the lack of schooling, the drug and alcohol dependency, the isolation.

Vance becomes successful due to some specific interventions: he moves in with Meemaw instead of bouncing around with his mother from place to place, he is encouraged by a caring high school teacher who gets him thinking about college, and he joins the Marines. Then he succeeds at Ohio State (while overworking himself), gets admitted to Yale Law, and works for a hedge fund. (There was a story this morning that he’s returning to Ohio to start a non-profit.)

I want to be fair to J.D. Vance. He didn’t set out to write a book about “the people the media doesn’t understand.” He didn’t try to write a sociological treatise or an anthropological ethnography of a people group. He’s just a guy reflecting on his own upbringing who borrows from some sociology and family systems theory along the way. In that light, it’s really a story of intergenerational family dysfunction and the way in which that creates challenges to success in future generations (something about the sins of the parents being visited about children and grandchildren sounds almost biblical). 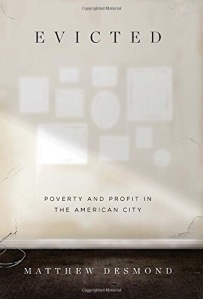 I heard about Matt Desmond’s book in an NPR story this summer and then again in a Chronicle of Higher Ed update. I bought it right away and got about halfway through it before my crazy semester started. I was able to finish it once grades were in.

Desmond is a Harvard sociologist who did his graduate work at Wisconsin. Partly for his dissertation and partly because of his commitments to the people he met, he lived in substandard housing for a long time. He does a deep ethnography on people who struggle to solve their housing issues. They seem to be in a continuing pattern of renting a ratty apartment for way too much money, having trouble getting the landlord to respond to issues, having family crises, falling behind on the rent, being evicted, and starting all over again.

With each eviction, finding the next place becomes that much more difficult. Rents on substandard apartments in crime-ridden areas would go for over half my mortgage. A “good deal” meant someone could get a place for $595 a month. Because of prior evictions or criminal records, housing vouchers were not available and public housing was denied. People living on limited incomes might spend up to 80% of monthly income just on housing. And there are no tax incentives for renting.

The landlords may want to be good people who are providing housing, but they depend upon the court protecting their rights to make return on their investments. Besides, they know that another desperate potential tenant is ready to move in at a moment’s notice. They aren’t malicious but they are blind to the ways in which their very livelihood is dependent upon  planned exploitation. There’s a point in the book where he argues that the owner of the dilapidated trailer park made 51 times what his renters made.

There were some occasional success stories in the book but more often past patterns repeat in something of a downward spiral. It’s a remarkable book but hard to come away hopeful. It’s a look inside an economic segment of society we rarely look at.

I guarantee you that not one politician in 2016 ran on the lack of affordable housing in America’s cities. There were no republicans looking to advance tax incentives for developers to expand affordable housing and no democrats looking to change the Byzantine regulations governing access to getting a roof over one’s head. Desmond’s book doesn’t explore politics directly but I’d confidently guess that the renters Matt profiles didn’t vote: could be due to the criminal record, the voter ID laws, or more likely because they have more immediate issues to deal with like making sure their kids eat something.

No one has written a post-election story about why inner city residents are not engaged in civic life. The cynic in me thinks that it’s because we don’t want them engaged (history buffs know that this is why we used to tie voting to owning property). No one has challenged the Trump administration or Governor Walker or the mayor Barrett of Milwaukee to find a way to respond to the renters’ needs.

Desmond argues that it’s not part of our sociological and political discourse because we fail to see the linkages that connect our economic success as a society with the fact that these folks (Appalachians as well as inner city renters) are at the mercy of economic forces that depend upon them being where they are. Here is a long passage where he makes this point explicitly:

When I began studying poverty as a graduate student, I learned that most accounts explained inequality in one of two ways. The first referenced “structural forces” seemingly beyond control: historic legacies of discrimination, say, or massive transformation of the economy. The second emphasized individual deficiencies, from “cultural” practices, like starting a family out of wedlock, to “human capital” shortfalls, like low levels of education. Liberals preferred the first explanation and conservatives the second. To me, both seemed off. Each treated low-income families as if they lived in quarantine. With books about single mothers, gang members, or the homeless, social scientists and journalists were writing about poor people as if they were cut off from the rest of society. The poor were said to be “invisible” or part of “the other America.” The ghetto was treated like “a city within a city.” The poor were being left out of the inequality debate, as if we believed the livelihoods of the rich and middle class were intertwined but those of the poor and everyone else were not. Where were the rich people who wielded enormous influence over the lives of low-income families and their communities – who were rich precisely because they did so? Why, I wondered, have we documented how the poor make ends meet without asking why their bills or so high or where they money is flowing?

In my Spirituality, Faith, and Justice class we read Michael Sandel’s Justice. He wrestles with what it means to have a good society and explores whether it is based on utilitarianism, libertarianism, or virtue. At the end, he comes away with a commitment to the common good — a recognition that when people are left behind we are all worse off. It’s a bit of an idealistic vision, as my students point out, and struggles to make a securely argument on why we should even care about cases like the ones Vance and Sandel show us. But that isn’t the only book we use in the class. Books by Christena Cleveland, David Fitch and Geoff Holsclaw, and Andy Crouch remind us that we are part of something larger called the Body of Christ and that we have a personal obligation to pay attention to God’s work in the world around us.

Maybe the point is that nobody is supposed to be Left Behind.

3 thoughts on “On Being Left Behind: Hillbilly Elegy and Evicted”