At some point, I’ll find enough perspective to write a reflection on the 2016 presidential election. For now, I’m just struggling with the uncertainty on a new administration where every day brings new questions and puzzles. It’s really hard for a policy wonk like me to figure out what’s likely to happen in the coming months. So many things are up in the air: health care, international trade, the Middle East, market stability, transparent government. And it’s only day three. 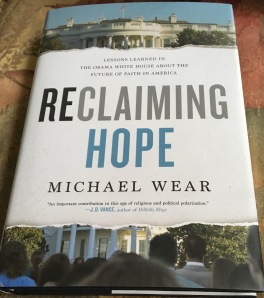 The afternoon before the inauguration (best ever! record crowds!) I was pleased when the mail carrier delivered Michael Wear’s Reclaiming Hope: Lessons Learned in the Obama White House About the Future of Faith in America. I finished it last night.

As a college student, Michael got to meet then-Senator Obama at a Winter meeting of the DNC. Michael introduced himself as a Christian who believed that Obama should run for president and that he could win (based in no small part on that rousing 2004 DNC keynote). He offered to join the campaign when the day came and badgered just the right amount to be taken up on the offer.

Being an evangelical Christian gave Michael insights into a segment of the American electorate that too many Democrats had been tone deaf toward. He actually wrote some background material that Obama used when having his Saddleback interview with Rich Warren. After Obama’s victory months later, Michael was invited to join the administration in the Office of Faith-Based and Neighborhood Partnership (OFBNP — a reworking of the office Bush had launched) where he spent the next four years.

Most of the book summarizes the work of the OFBNP, both positive and negative. It shows the difficulty of developing allies within the religious community (especially among evangelicals and Catholics). It shows the difficulty of working in the midst of administration colleagues who were functional religious illiterates. He tells a story of designing a policy document on faith and economics titled “Economic Fairness and the Least of These” and his colleagues couldn’t figure out who “these” referred to. On the evangelical side, he had to navigate prominent evangelical leaders who wouldn’t believe that Obama was a Christian (in spite of his repeated testimonies to the contrary) and actively worked against the president.

As might be expected, the tensions between the OFBNP and the broader community were particularly high around issues of abortion, contraception, and same-sex marriage. It’s not that other issues (like poverty or human trafficking) weren’t important. It’s just that the trigger issues seemed to overwhelm everything else.

Michael, true to his job description, tried to make clear how these policy initiatives would be read by various religious groups (most notably Evangelicals and Catholics). Too often, these concerns did not sway the general sentiment of the political shop. Too many decisions were made in light of protecting the interest of various constituent groups and not in building bridges to new populations. This was especially true in the run-up to the 2012 re-election campaign.

In reading the book, you sense Michael’s early idealism give way to frustration (but, to his credit, never cyncism). His last day with the Obama administration was Inauguration Day 2013. He closes the book with reflections on the Christian notion of Hope and how that changes the political calculus (especially when compared to views expressed by people like Ta-nehesi Coates).

In finishing the book, I found myself with several questions (which I hope Michael might address).

The book was a wonderful read for a political junkie. It fed my desire for inside knowledge and for seeing the sausage get made. I shared in Michael’s frustrations and still end up in an idealistic place.

Politics has always been one of my imagined alternative careers if I weren’t in academia (journalism is the other). Maybe it’s not too late, even for me.