I can honestly say that I’ve never experienced a week like this. And I cut my political teeth in 1974 watching the Watergate hearings.

Several of my friends have been struggling to figure out how Christians should respond to this onslaught of events. What is the meaning of Romans 13? What is the nature of our political theology? Too often, their FaceBook commenters ask “what were you doing when Obama was president?” — which is remarkably selective memory but I’ll let that go. 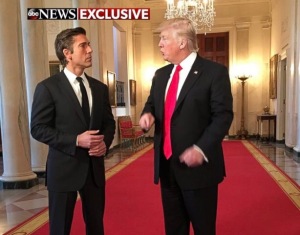 But there was a piece of Trump’s interview with David Muir on ABC that has been stuck in my brain. They were discussing the controversy over the crowd size at the inauguration.

PRESIDENT TRUMP: Not you personally but your network — and they tried to demean the speech. And I know when things are good or bad. A poll just came out on my inauguration speech which was extraordinary that people loved it. Loved and liked. And it was an extraordinary poll.
DAVID MUIR: I guess that’s what I’m getting at. You talked about the poll, the people loving your inaugural speech and the size of your …
PRESIDENT TRUMP: No, because you bring it up.

DAVID MUIR: See, I — I’m not interested in the inaugural crowd size. I think the American people can look at images side by side and decide for themselves. I am curious about the first full day here at the White House, choosing to send the press secretary out into the briefing room, summoning reporters to talk about the inaugural crowd size. Does that send a message to the American people that that’s — that’s more important than some of the very pressing issues?
PRESIDENT TRUMP: Part of my whole victory was that the men and women of this country who have been forgotten will never be forgotten again. Part of that is when they try and demean me unfairly ’cause we had a massive crowd of people. We had a crowd — I looked over that sea of people and I said to myself, “Wow.”
And I’ve seen crowds before. Big, big crowds. That was some crowd. When I looked at the numbers that happened to come in from all of the various sources, we had the biggest audience in the history of inaugural speeches. I said the men and women that I was talking to who came out and voted will never be forgotten again. Therefore I won’t allow you or other people like you to demean that crowd and to demean the people that came to Washington, D.C., from faraway places because they like me. But more importantly they like what I’m saying.
DAVID MUIR: I just wanna say I didn’t demean anyone who was in that crowd. We did coverage for hours …
(OVERTALK)
PRESIDENT TRUMP: No, I think you’re demeaning by talking the way you’re talking. I think you’re demeaning. And that’s why I think a lot of people turned on you and turned on a lot of other people. And that’s why you have a 17 percent approval rating, which is pretty bad.

I could spent time disputing the “biggest audience” claim. I could rebut the claims on the positive polling on the speech. The poll Trump mentions is a Politico/Morning Consult poll and Politico reports: “Trump got relatively high marks on his Friday address, with 49 percent of those who watched or heard about the speech saying it was excellent or good, and just 39 percent rating it as only fair or poor.” Frankly, in comparison to previous inaugurals, those are horrible numbers.

What really got my attention is what I highlighted above. Trump has proclaimed himself president of the people who were forgotten yet came out and voted for him, who traveled from their small towns to Washington to be there for this historic event, who filled the venues were he campaigned. This is not me.

To not privilege their perspective is to demean them and he won’t stand for that (and I guess the ratings are supposed to reflect that). But he has no problem demeaning my positions.

Take the outrageous claims about up to three million fraudulent votes, none of which could possibly have voted for him but all must have voted for Clinton. Besides the fact that other than inaccurate voter registration rolls (which is what the oft-cited Pew study was about), there is no evidence of voter impersonation (Trump commented on “dead people are registered to vote and voting, which they do” — which Trevor Noah called the worst episode of Walking Dead ever). Trump also misrepresents comments made by Obama in 2008 about election fraud (and he cites it as being in Chicago when it was in Kent, Ohio).

Trump started the inaugural speech by calling out the Washington Establishment. But his later comments make clear that there is only one kind of forgotten American — those that voted for him and his “tremendous movement”.

The questions about dual registration prompted me to do what Bannon and Spicer couldn’t be troubled to do — check my past registrations. I learned that I’m no longer registered to vote in either California or Oregon.

But I’m a doctorally trained sociologist who tends to vote Democratic. In Trump’s eyes, I’m not forgotten, I’m establishment.

I’m a white evangelical male who votes Democratic (which the media and politicians alike ignore).

But whenever Trump repeats his concern for the Forgotten, whenever he advances the personal policies he advocated (which he does because he feels he promised them he would), when he demeans the press, when he gags federal agencies, he has said that people like me and my approach to civic life don’t matter.

He is going to be the President of “His People” and I’m not part of the equation.

He’s told me that He’s Not My President, he’s Theirs. And I’m just expected to just go along for the ride because my side lost.

One thought on ““Not My President”: Or So He Keeps Telling Me”