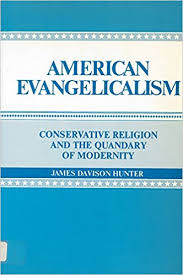 As part of my book project, I’m tracing how sociologists have approached evangelicals from a theoretical rather than descriptive perspective. What follows is my treatment of James Davison Hunter’s American Evangelicalism (1983).

At the time that major newsmagazines discovered evangelicals in the late 1970s, sociologists hadn’t really devoted sufficient attention to this segment of the American religious landscape. In part, this was due to the belief popular in the 1960s that secularization was a dominant force within society and that religion would be less important going forward. With that presumption, the vitality of a conservative religious group like evangelicals didn’t fit the established theoretical framework. Perhaps, as Steven Warner observed at the time {Warner, 1979}, this could be explained by the biases present even in sociologists of religion — seeing evangelicals as lower class, as politically conservative, and as a historical throwback resisting the natural order of progress.  It should be noted that much of modern journalism, with the exception of religion reporters, suffers from the same biases four decades later. Warner writes:

Evangelicalism has heretofore not received the sociological attention that its intrinsic importance calls for. It is overlooked, or discounted, stereotyped and patronized (3).

One sociologist who responded to Warner’s call for better theoretical work on evangelicalism was James Davison Hunter. His American Evangelicalism {Hunter, 1983} did a deep dive into evangelicalism (although he included fundamentalists in his data set) and examined it from a sociology of knowledge format. To Hunter, the modern age — that earlier sociologists saw as feeding secularism — provided a critical challenge for evangelicals.

Hunter argued that the modern age individualized religion, presented it as but once choice among many, and removed religion from its connections to the broader institutional mosaic. Where faith was previously imbedded in community life, it became increasingly personal. For example, the Supreme Court has dealt with “sincerely held religious beliefs” as the screen used to evaluate religious freedom claims; a clearly individualized approach. In the face of the structural pluralism of religious life, a sense of equivalence is created between mainline churches, evangelical churches, mosques, temples, and yoga classes. Given the diversity of religious views present, and the constitutional protections arising from the Due Process clause of the 14th Amendment, religion in general and conservative religion in particular, is removed from consideration of everyday political life.

The response to these challenges, Hunter suggested, occurred in the realm of “cognitive bargaining” — nurturing a particular mode of thought about things religious that stands in contrast to the forces of modernity. While some religious groups focused on how to incorporate the modern age into their religious self-understandings, not so with evangelicals. They adopted a strategy Hunter called cognitive intransigence, “ignoring the plurality by affirming the veracity of one tradition and the illegitimacy of the others (16-17).”

Key to the cognitive instransigence effort is the maintenance of a distinctive “worldview”. Evangelicals spend considerable effort to articulate a particular means of understanding the world in an effort commonly referred to as “apologetics”. Hunter provided a deep analysis of books written to evangelicals designed to maintain a distinct worldview. Interestingly, he observed that many of those books incorporated elements of modern rationality, reducing evangelical faith to a series of steps (“four spiritual laws”).

One of the distinctive elements of evangelicalism in this period was the development of significant parallel structures. Contemporary Christian music arises alongside popular rock-and-roll. Specifically Christian periodicals appear alongside popular newsmagazines. Religious broadcasting moves from being a fringe movement to a staple of American entertainment. Christian publising allows for a continual stream of appropriately supportive material in front of evangelical readers to be found in distinctly Christian bookstores.

The combination of parallel institutions and isolated social location allowed evangelicals to maintain their distincive worldview in the face of increasing forces of pluralism and secularity. Doing so, however, is an uphill battle. Hunter argued:

Cognitive survival in this climate will require the continued effort to build and maintain a sociocultural world in which the Evangelical view of reality is actively supported, even taken for granted. Stable institutions acting as plausibilty structures would be capable of reimposing their objectified meanings on a laity perplexed by the contrary realities of day-to-day life, of reassuring the doubter that things are all right after all (132).

I will return to this analysis in the next chapter, but I can give a preview here. Some Christian bookstores, like Family Christian chain closed {Merritt, 2017}. Of those that remain, it has become harder to maintain a consistent worldview as evangelical authors raise new perspectives; some of these have begun dropping certain authors. The presence of online book sources like Amazon and Barnes and Noble render these efforts at control limited at best. The percentage of Christian young people opting to attend Christian universities has declined, especially among denominational schools. Christian universities have had to broaden their generic appeal to maintain enrollment. As we will see later, the impact of social media on those attempting a pristine Christian worldview cannot be overstated.

If we take the worldview and social location issues together, then, evangelicals have struggled with “the quandary of modernity” precisely as Hunter suggested. As the worldview dynamics weaken while evangelicals are mingling more in contemporary secular society, it creates fissures in what might have been a more coherent perspective in past decades.

This has two predictable outcomes. One is increased innovation within the evangelical camp with less coherent boundaries. The other, paradoxically, is an increased defensiveness of those who hope to protect those boundaries. Christian Smith’s American Evangelicalism {Smith, 1998} is helpful in explaining this latter phenomenon.