This week the Pew Research Center released a new piece of work that supplements the data on American religion they’ve been working on for years. Using the statistical technique of cluster analysis, they analyzed several recent surveys to see if respondents could be categorized on a number of variables at the same time. This avoids the single question analysis and suggests that there are different kinds of religious expression in America. While their typology isn’t definitive, it provides some interesting insights and raises important questions.

I spent some time — when I could have been working on my book — trying to get my head around the new typology. I worked through what they call the Full Report, focusing particularly on the more religious end of the spectrum.

They identify seven orientations in their typology, ranging from most religious to most secular. They label these Sunday Stalwarts, God and Country Believers, Diversely Devout, Relaxed Religious, Spiritually Awake, Religiously Resisters, and Solidly Secular. 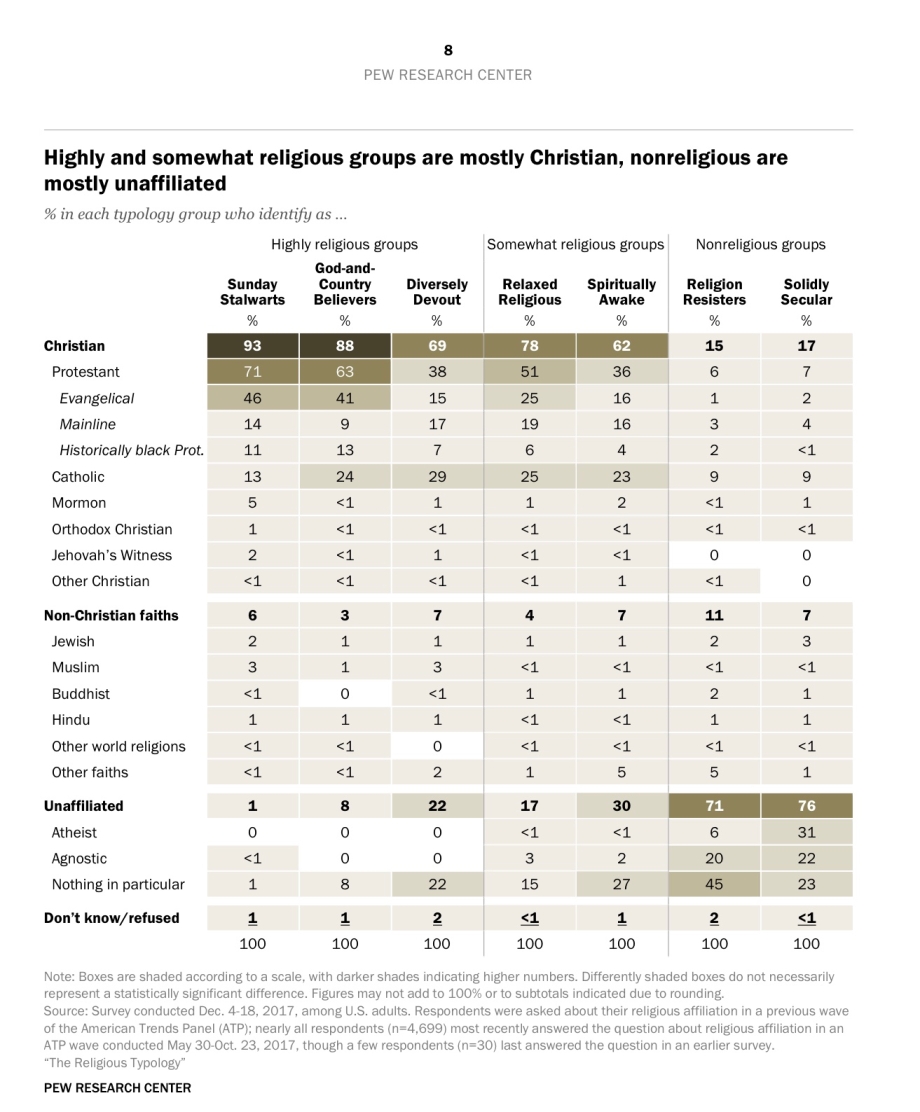 It’s important to recognize that the typologies are not the same size. Just under a quarter of respondents (24%) fall in the Sunday Stalwart category. The two highly religious but not practicing groups make up another 14%. The two spiritual categories account for 29% and the two secular categories for 33%. As a result, even though it appears that similar percentages of the first two types identify as evangelicals, the picture is a little different when you look across the rows.

I took the average breakdown of the typology of respondents across the four waves of the survey and multiplied by the percent evangelical. That gives me approximately 22% of the overall sample identifying as evangelicals, pretty close to what Pew has referenced before. Of those 22%, 50% are Sunday Stalwarts, 16% are God and Country Believers, 17% are Relaxed Religious, and 14% are Spiritually Awake. Granted, this is dependent upon the somewhat fuzzy evangelical self-identification but is still informative.

Given the recent excellent scholarship by Andrew Whitehead and his colleagues on Christian Nationalism, the contrast between Sunday Stalwarts and God and Country Believers caught my attention. As the following chart shows, the primary difference between the two groups involves church attendance (and small groups).

Sunday Stalwarts report a rate of weekly church attendance over three times higher than the God and Country folks. But the striking thing to me is the general similarity they have on a number of other issues. They are similar on Biblical literalism, on God, on heaven, and on hell, There are minor differences on views of church, importance of religion, and prayer. Somewhat striking is that the God and Country folks are much more likely to say that believing in God is necessary to be moral.

The following chart shows this similarity in graphic form.

While for some of these issues, the Diversely Devout are similar to the God and Country people, for many there is very little space between the position of the Sunday Stalwarts and God and Country types.

So perhaps the difference between Sunday Stalwarts and God and Country Believers is more demographic than simply belief. The next chart explores that possibility.

While there are some minor differences between the first two groups, the overall patterns seems very similar. Both groups are White, Female, Middle-Class or less, Over 50, and Republican. The Diversely Devout are different in makeup from the other two.

So what does this tell us?

First, the God and Country Believers appear to be fairly orthodox in belief even though they are less likely to attend church. Surveys that simply look to correlate belief patterns with other outcome variables (as I have done) will not be able to pull apart these two groups.

Second, and more importantly, it raises significant questions about the impact of church involvement. If 82% of the Sunday Stalwarts attend church weekly or more, shouldn’t that show up somehow in the other variables? There is a major difference between the two groups on importance of religion, but that seems to be largely circular — people who attend church think religion is important and attending demonstrates that importance.

Shouldn’t being involved in a local congregation provide a significant religious foundation that makes those who attend appear markedly different from those who do not? In this period where religious commitment is tied up in supporting a specific view of the political landscape, the similarity between the Sunday Stalwarts and the God and Country Believers should cause every pastor to think seriously about what they will do with the 20-45 minutes of the Sunday Sermon.

3 thoughts on “The New Pew Religious Typology: What’s the Impact of Church?”