This week Christianity Today reported on research sponsored by the Billy Graham Center and conducted by LifeWay Research. Titled “Why Evangelicals Voted Trump: Debunking the 81%,” it reported on data from 3,000 respondents.  These respondents were analyzed in three groups: evangelicals by belief (EBB), self-identified evangelicals (SIE), and non-evangelicals.

It’s hard to work backwards from infographics like this one, especially since we don’t have the racial and ethnic breakdowns from within each group. Not knowing the size of each group listed at the bottom of the infographic makes it hard to make sense of the 1 in 3 whites voting against Clinton or 1 in 4 blacks voting against Trump. The 1 in 5 evangelicals who didn’t vote is hard to reconcile with the other data — it looks like they are removed from the 58% figure (since the totals on that statistic add to 100%).

One thing that stands out immediately is that 77% of white evangelicals voted for Trump. While it’s true that this is less than 81%, it’s not really a lot to shout about. As Daniel Jose Camacho observed in Sojourners, including all evangelicals by belief regardless of race or ethnicity seems quite problematic.

The CT article states that Pew found that 1 in 3 evangelicals were nonwhite. If we assume the same breakdown among the 1,064 evangelicals by belief (EBB), that means roughly 350 were nonwhite. If 77% of the white EBB group voted Trump, then 20% of the nonwhite group would have voted Trump to get to 58%. This suggests a much larger black population (9%) than hispanic or other (40%+), given the infographic. (NOTE: This would be much easier to figure out if LifeWay shared their data, which they don’t.) 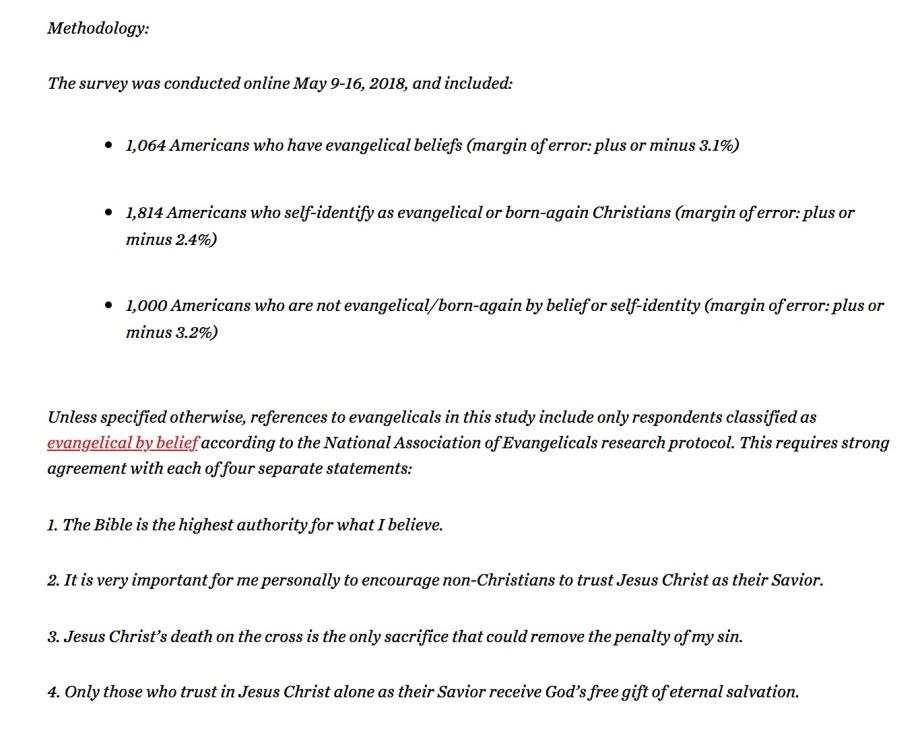 Other problems arise in the methodology section. The story opens telling us that they sampled 3,000 people but the total of the three groups comes to over 3,800. I would assume that there is some measure of overlap between the EBB group and the SIE group. In other words, some people qualified as EBB only, some as SIE only, and some as both.

The primary focus on the analysis is on the EBB group, although there are some comparisons made. As Tim Gloege observed on twitter, there are many LGBTQ people or socialists who could affirm the four statements described. Since we don’t have access to the actual question wording, it’s hard to make sense of exactly what people are agreeing to. That, of course, assumes that people read questions carefully (not doing so runs the risk of being accused a heretic).

There is a larger problem for me in the study: the assumption that evangelical beliefs inform political decisions. As I have written many times on this site, my Occam’s Razor answer to this question is that many white evangelicals have long been Republicans. What motivated their voting behavior? Their party preference. 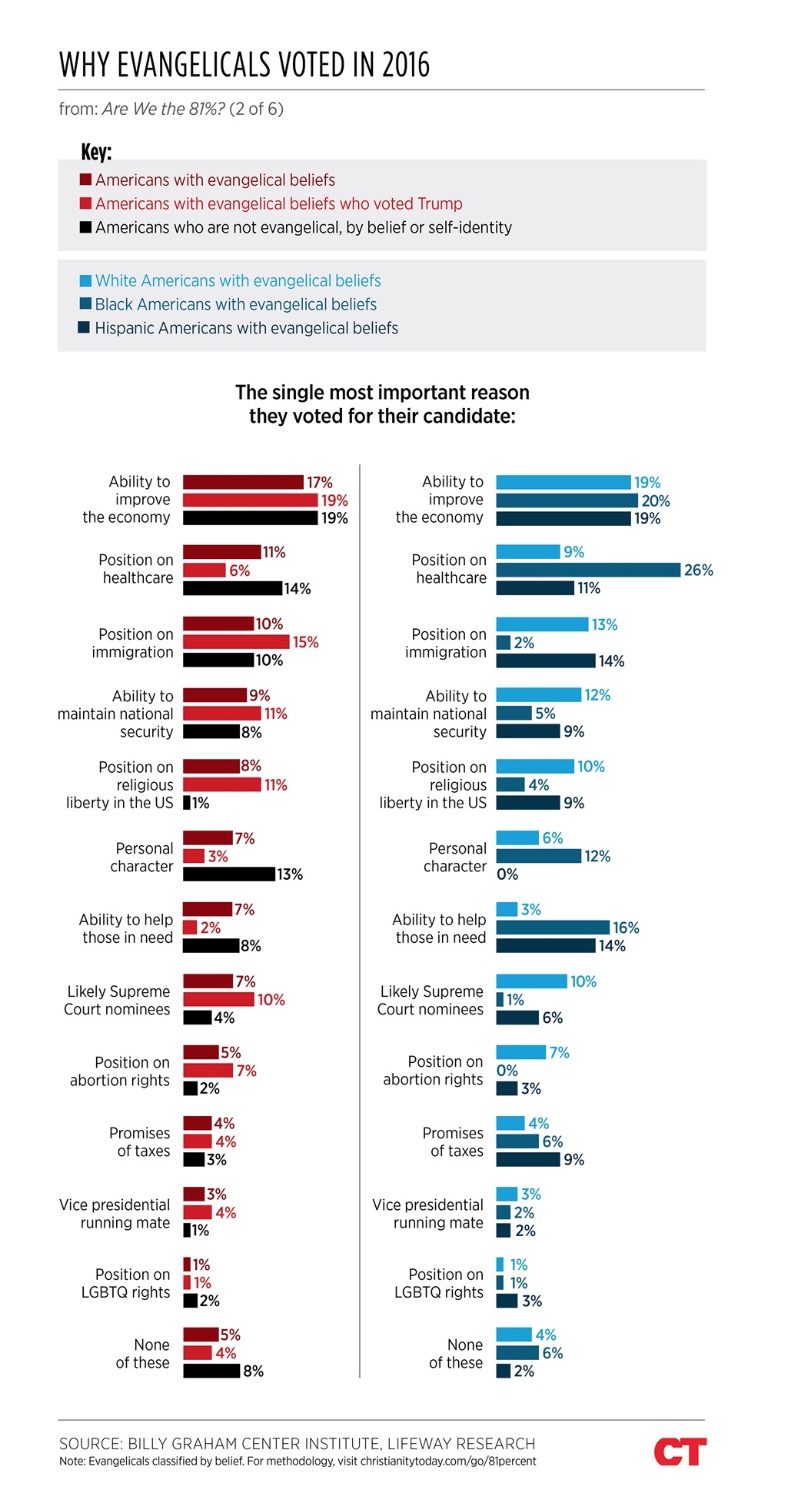 That’s the biggest takeaway from the bar charts on the left hand side of this graphic. The differences between EBB, SIE, and non-evangelicals only stand out on a handful of issues: personal character of the candidate, abortion, and religious liberty. (NOTE 2: Not knowing what the question asked makes this impossible to unpack. It’s not clear if the assumption is that “position on” means agreement with my position. “Promises of taxes” makes me think that there was other wording involved.)

I don’t mean that as an attack on CT, BGC, or LifeWay. It’s quite likely that the average respondent didn’t mobilize their evangelical beliefs when answering questions about taxes or the vice president.

It’s also difficult to evaluate the chart when respondents were asked to identify “their single most important reason”. That’s not how most people make political decisions, preferring a constellation of more of less consistent views (although we are capable of remarkable cognitive dissonance).

Not knowing the questions also makes it difficult to unpack the right hand side of the graphic. It is true that 13% of white EBBs saw immigration as their most important issue. So did 14% of hispanic EBBs. It’s hard to fathom that both groups meant the same thing.

In summary, there is value in trying to understand what motivates evangelical voters in national elections. But this needs to be done not to explain away a troublesome talking point.

What is needed instead is a careful exploration of whether people of faith are mobilizing their theological commitments, how those methods vary be the measures of evangelicalism, and how people evaluate the real choices between real candidates.

I have colleagues in sociology, political science, and history who are very interested in the exploration of these questions. It would be so valuable if we were all working together with agreed-upon methodology and shared data. That is, if we really want to understand what motivates evangelical voters beyond party, fear, and power.